skip to main | skip to sidebar

Politicians, media pundits, economists and business leaders are blowing a lot of smoke up society’s collective ass in their attempts to perpetuate the myth of economic recovery. Almost no one understands (or pretends not to) that this time around there won’t be one. Even the so-called economic experts, from Joseph Stiglitz, Paul Krugman and Robert Reich on the left to John Boehner, Michele Bachmann and Sarah Palin on the right, seem to miss the big picture; the global economy is on the verge of collapse because of a growing scarcity of cheap energy and other vital resources that fuel economic growth. Industrial Capitalism is dying, as inevitably it must, and the economy we once knew is never coming back.
What does the future a decade hence look like?
If the future you visualize is filled with flying cars, cheap gasoline, frequent air travel to exotic destinations, lavish lifestyles for the masses, vast domed cities and all the other claptrap favored by futurists of the corporate class, you’re in for a big surprise. And bitter disappointment.
Ponder this:
When today becomes yesterday, it will be tomorrow.
If (having pondered) your vision of the future is still distorted by wishful thinking, perhaps a change in perspective can help you see things as they are. Juliet Schor’s Yes! Magazine article, Less Work, More Living, describes her vision* of a future that could become reality, providing we survive the current round of Democratic cowardice and short-sightedness and Republican stupidity, intransigence and obstructionism. Oh, alright—and rampant greed.
When today becomes yesterday, it will be tomorrow. Exactly what does this mean? It means that when our present—our now—looks more like the 1890s (with certain social, fashion and technological improvements) than the 1950s, we can be certain that our sustainable future has arrived. Ms. Schor presents a pretty clear vision of what our future could be like.
As it turns out, it’s not so scary after all.
*Her thinking on the subject of building a sustainable society closely mirrors mine.
Q >>>
Posted by Phil at 8:12 PM 2 comments:

If you haven’t yet seen Van Jones’ “Rebuild the Dream” speech, I urge you to at least take a look at the highlights; I think you’ll find it worth your while. Jones, aided and abetted by MoveOn.org and other influential progressive groups, is starting a movement designed to bring about a more balanced and more just society that meets the economic needs of all its members.
Campaign for America’s Future has the full video accompanied by an article, by Robert Borosage, documenting American Dream Movement’s launch. Another high-profile progressive organization, Common Dreams.org, hosts a WaPo article written by Rachel Weiner that provides additional insight.
To accomplish its goals the American Dream Movement needs (and wants) your input. If you’ve got any ideas at all on how to undo the damages done to working- and middle-class American society by our corporate-run government and Wall Street financiers, now is your chance to pitch them to people who might actually listen to you. Join the movement. Get involved!
While the American Dream Movement is an example of grassroots activism at its finest, and while the movement seems to have gained a lot of traction in a relatively short time, its success is not guaranteed. To succeed, this movement needs popular support on a national scale, and that means getting the message in front of as many people as possible, by every means possible, as frequently as possible. Blog about it, write about it in letters-to-the-editor, tweet it, text it, talk about it, chat it up to everyone you know. Help it go viral. Help make it part of the public discourse.
Republicans tell us, disingenuously, that America is broke. Van Jones tells us it’s not broke, only broken, and that it can be fixed. The American Dream Movement promises to show us how.
Q >>>
Posted by Phil at 5:52 PM 7 comments:

For the greater good of preserving our nation’s sovereignty, solvency and sanity, we should rewrite Constitutional laws, tax laws and civil laws in ways that show the 2 percent what it’s like to be the other 98 percent.
Q >>>
Posted by Phil at 7:23 PM No comments:

Engineering economic disasters is one of the few things the GOP leadership is really good at. Another is their ability to shift the blame for the destruction they cause to the Democrats. They’ve proven, over time and beyond all doubt, that Republicans have the requisite skills necessary to lead the nation’s working- and middle-classes to financial ruin and, possibly, to something far more dire. Doesn’t mean they’re stupid or incompetent, mind you, it only means they’re sinister.
What motivates Republicans to put business interests ahead of human interests or environmental interests or sustainability interests or, apparently, having-any-kind-of-a-future-at-all interests? Why are Republicans trying to remove all the safeguards that were put in place to protect the public from corporate excess? Is it, as most pundits claim, only that corporate entities want to cut expenses and maximize profits for their investors, or is there something far darker and more ominous  (but, perhaps, more necessary) lurking in the shadows of public perception?
The answers to these questions, I suspect, are known only to the authors of GOP policies that intentionally harm, by way of disenfranchisement, multitudes of people from the middle- and working-classes and everyone from the south pole of the leisure class. However, I do have a theory—supported by mountains of evidence, but no rock-solid proof (yet)—that the GOP’s real intention is to implement policies that result in depopulating the planet.
Assuming that depopulation is the Republican’s ultimate goal, how might it be accomplished in the least amount of time with the least amount of opposition? Would marginalizing vast segments of the redundant population prior to its culling be among the initial steps? You’re damned right it would (as amply demonstrated by the fascist regime of Nazi Germany during the run-up to WWII).
Stay tuned for further discussion.

Republicans bleed the poor and the middle class every chance they get.
“The corporatists have been waiting for this day.  When Americans are struggling to survive, when their homes are being swept away by Wall Street bankers, when their jobs are going South of the Border and elsewhere to poor countries that have no environmental regulations and no workers' rights, it's the perfect time to kick 'em when they're down, which is exactly what Governor Walker is doing to unionized public workers. He's joyfully kicking them as hard as he can to wreck the equal protection and environmental laws that men and women have fought and died for to establish in this country. The Koch Brothers, the oil and industrialized polluters that make close to $100 billion dollars a year in profits, are cheering Walker on.  If the industrialists win this battle, predictions are that the earth will be unrecognizable by 2050.” —Jacqueline Marcus
No shit! But then, I’m pretty sure Earth looked quite a bit different in 1970 than it does today; a lot can happen in 40 years. Too early to tell if whatever’s coming will turn out to be a good thing or a bad thing. However it shakes out, there’s a high probability that by 2050 the global population will be much smaller—not larger—than it is now. But that’s not what the above quote is about.
Or maybe it is. Read Jacqueline Marcus’ full commentary at Buzzflash.

Of course, if you like being fucked so hard you'll never see straight again, then go right ahead.
Read the article at Truthout.

No, no, this has nothing to do with the Internet. This is all about denying abortion and reproductive health and family planning services to women desperately in need of same. In a world that’s already dangerously overpopulated (and a world that seems to be setting up as much as 90% of its total population for near-term extermination), it gets ever more difficult to understand where the anti-choice, pro-life morons who depend on religion to inform their every opinion are coming from.
"We must speak more clearly about sexuality, contraception, about abortion, about values that control population, because the ecological crisis, in short, is the population crisis. Cut the population by 90% and there aren't enough people left to do a great deal of ecological damage." —Mikhail Gorbachev
This is exactly the kind of shit that happens when people with small brains and even smaller minds try to establish rules for other people to live by. But, hey, desperate times call for desperate measures, don’t they?
Chug-a-lug
Gone Fishin’
Beat Me, Senseless
These are just a few of the reasons why I’m pro-choice.

One of the main differences between conservatives and progressives is that conservatives want to be the sole beneficiaries of the wealth that society produces, while progressives tend to favor a saner, less selfish, more equitable approach to wealth distribution.
Each of the four short-but-excellent articles, linked to below, were written by Comrade E.B. Misfit and posted on her blog, Just an Earth-bound Misfit. I claim authorship only of the link-text titles that appear in this blog entry; I thought they were a better way to get your attention than “Click here.”
Greed Always Trumps Good Sense
Freeze, muthafuggah!
Banana Republic
Stay down, scumbag!
Jesus! The Comrade gets it! I’m just disgusted that so many don’t. 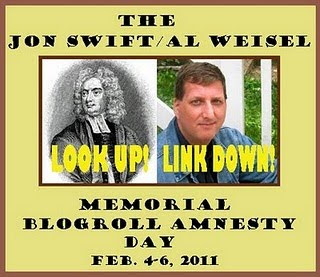 Okay, okay, so I nicked the image from Don Durito over at Notes From Underground. At the time it seemed pretty fair because he'd nicked it from Skippy, who probably nicked it from . . . oh, who cares? The points are that it's a fitting tribute to a blogging legend that departed the blogosphere way too soon and that it's Blogroll Amnesty Day Week Month, once again.

[Update: If you're serious about gettin' some k linky love, leave a comment.]

Friendship? Not So Much!

Anyone on the left who claims to have friends on the right is a full-of-shit fucking moron. Why would anyone call someone that wants to see them unemployed, broke, homeless, hungry, in poor health—in short, marginalized in every possible way—and, finally, dead, a friend? Get a clue, lefties; right-wingers are not your friends. They never have been, and they never will be. Get over it. Move on!
Q >>>
Posted by Phil at 5:13 PM 4 comments:

Phil
Slightly twisted at one end and mostly used up -- sort of like a joint that's been passed around the room a couple of times.

My Other Blog is in Stasis